Chichen Itza is probably the most important city of the Mayan Culture in the Yucatan peninsula and has the most amazing buildings of any other Mayan ancient cities. Chichen Itza is also the largest and most impressive of the Mayan ruins,  is an spectacular and mystical place to visit,  if you only want to do one day trip during your vacation in Cancun, this should be this one.

Chichen-Itza (chee-chehn eet-sah) in Maya, was a sacred city of the Itza and the name literally means: "Mouth of the well of the Itza". Located 75 miles east of Merida, the capital of the State of Yucatan, Mexico; it covers an area of approximately six square miles where hundreds of buildings once stood. Now most are mounds but more than thirty may still be seen by tourists.

The ruins of Chichen Itza are divided into two groups. One group belongs to the classic Maya Period and was built between the 7th and 10th centuries A.D., at which time the city became a prominent ceremonial center. The other group corresponds to the Maya-Toltec Period, from the later part of the 10th century to the beginning of the 13th century A.D. This area includes the Sacred Well and most of the outstanding ruins.

Possibly the best known construction on the site is Kukulkan's Pyramid. El Castillo (Kukulkan-Quetzalcoatl), a square-based, stepped pyramid that is approximately 75 feet tall. This pyramid was built for astronomical purposes and during the vernal equinox (March 20) and the autumnal equinox (September 21) at about 3pm the sunlight bathes the western balustrade of the pyramid's main stairway. This causes seven isosceles triangles to form imitating the body of a serpent 37 yards long that creeps downwards until it joins the huge serpent's head carved in stone at the bottom of the stairway. 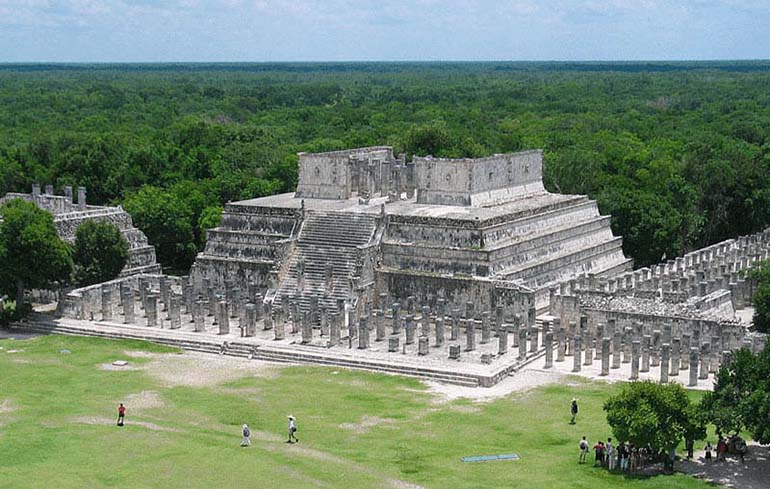 To make the most of your incredible experience at the ruins, we recommend to take one of the several tours to Chichen Itza that we offer. Our tours offer security, comfort an extremely knowledgeable and informative guides, you will learn so much about the Mayan culture and the wonder of the architecture, astronomy, and advanced civilization of the Mayas.

There are several tours to Chichen Itza departing from Cancun and the Mayan Riviera, you should prepare for a full day tour but we guarantee you won't regret.