The Mayan civilization was one of the most advance and sophisticated cultures in the Western Hemisphere before the arrival of European explorers. It flourished between 300 and 900 AD and once consisted of over 40 cities spread across southern Mexico, Guatemala, Honduras, and northern Belize where there are some of the most impressive ruins of these ancient cities that can be visited today. Many of these Mayan ruins have been designated World Heritage Sites.

The Mayan cities, full of magnificent stone temples and pyramids, were primarily ceremonial centers. Most of the Maya lived in rural areas and were farmers who looked to the priests of the cities for direction on the best days to plant, harvest, and marry. The Maya are famed for their impressive knowledge of mathematics and astronomy, which were integral to their religious rituals. They are also known for the practice of human sacrifice, which was a means of appeasing and nourishing the gods.

Mayan ruins located in Yucatan and the most visited on the peninsula. Eighteen structures have been restored over the years. Kukulcan Pyramid is the tallest and most important in Chichen Itza. During the Spring and Fall equinoxes, (March 21 & Sept 21) the setting sun creates shadows down the steps of the pyramid that resemble a snake descending. 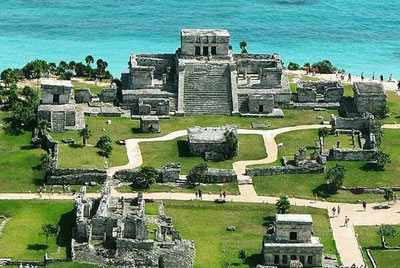 Located 131 kilometers south of Cancun, just 20 minutes south of Akumal on Hwy. 307. Facing the sea, Tulum is impressive and powerful. Known as the Walled City, Tulum was thought to be one of the most important cities of the ancient Mayan during its time. Fresco remnants are still visible inside some of the structures 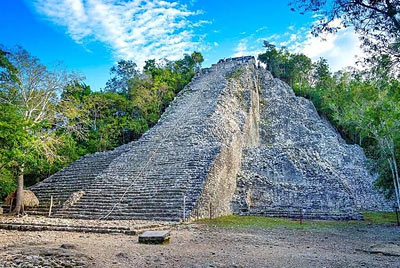 Located in the state of Quintana Roo Mexico at 42 km. west of Tulum. With many buildings still covered by jungle, Coba is over 80 sq. miles with 5 lakes. Nohoch Mul is the tallest pyramid in the Yucatan peninsula. It is 12 stories tall and has 120 steps to the top! But from the top you can view a magnificent span of jungle with the tops of other ruins reaching above the jungle canopy 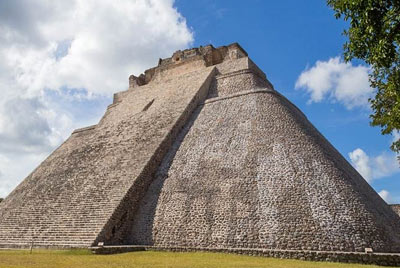 Located in Yucatan Mexico and some of the best on the peninsula. The name Uxmal means 'thrice-built' in Mayan, referring to the construction of its highest structure, the Pyramid of the Magician. The Maya would often build a new temple over an existing one, and in this case five stages of construction have actually been found. Uxmal was one of the largest cities of the Yucatán peninsula, and at its height was home to about 25,000 Maya 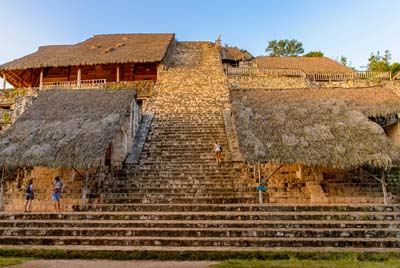 Located 174 km west of Cancún, just north of Valladolid city. A true display of their cultural achievements, this city is a prime example of the Mayan arts. The surviving friezes and murals that decorate its palace are unlike any other in the Mayan world. A good chance to see some of the most beautiful architectonic art that this culture produced. 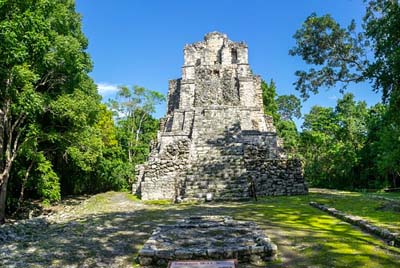 Also known as Chunyaxché, is a Mayan settlement located next to a lagoon in southern Quintana Roo, 152 km south of Cancún and 15 km south of Tulum. A great example of the Maya’s Peten architectural style usually found in sites further south like Tikal. One of the oldest Mayan cities and longest inhabited, this small site vital to prehispanic trade routes is worth a visit as it its unlike any other found nearby. 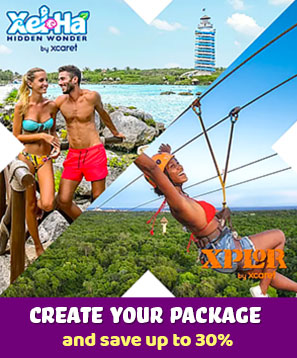