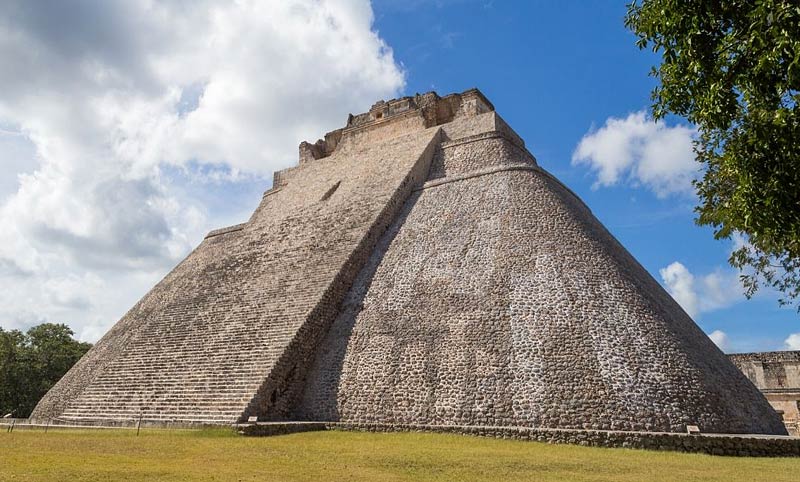 Pronounced "oosh-mawl," Uxmal was one of the greatest Maya cities. The city was built sometime during the 5th or 6th centuries A.D., but archaeological evidence suggests that the area had been inhabited as a farming center since as far back as 800 B.C. The city shows no architectural styles other than the purely Maya "Puuc" style. This is odd considering the widespread influence of other cultures in the region. The grandest structure of the site is the Pyramid of the Magician. Though not a true pyramid (it is elliptical, not square), the pyramid is a marvel, standing 38 meters tall with a staircase at a 60 degree angle, the pyramid is tall and steep. The view from the top, if you can handle the climb, is marvelous.

To the west, you’ll see the Nunnery Quadrangle. Named by the Spanish historian Fray Diego Lopez de Cogullado because it resembled a European monastery, the Nunnery is thought to have been an academy of some sort, either for the military or the children of the elite classes. Southwest of the pyramid, you will see the Governor’s Palace, the largest and fanciest structure on the premises. The intricate stonework and the 320 foot long mosaic facade of the palace make the building the gem of Uxmal.

The Governor’s palace is offset from the main grid that the rest of the city lies on. This reflects the astronomical skills of the Maya, as the Palace’s main door was placed in perfect alignment with Venus. Another large structure on the site is the Great Pyramid. At 30 meters tall, this nine-level pyramid is a dominant structure of Uxmal. It is decorated with ornate carvings of masks, birds, and flowers. Like many of the other ruins in Mexico, Uxmal has a restored ball court. However, the court is much simpler than other courts in other ancient cities. Also of note is the huge cisterns which supplied the city with water. Uxmal was built in an arid portion of the Yucatan peninsula, far away from any springs, rivers, or wells. To collect precious water, the city built huge cisterns to capture rain. Consequently, the rain god, Chaac, was the most worshipped deity in Uxmal. Other archaeological sites unearthed near Uxmal are Kabah, Sayil, Xlapak, and Labna, all of which were under the territorial influence of Uxmal.

How to get to Uxmal

There are some tours to visit Uxmal, however you should be prepare for a long trip. It's a pretty long drive from Cancun to Uxmal. (About 4 hours) Spending a night in Merida is a goog idea then you can visit Uxmal and if you want to, there are some other great ancient cities in the Yucatan peninsula like Kabah, Sayil, Xlapak and Labna that are worth to visit.