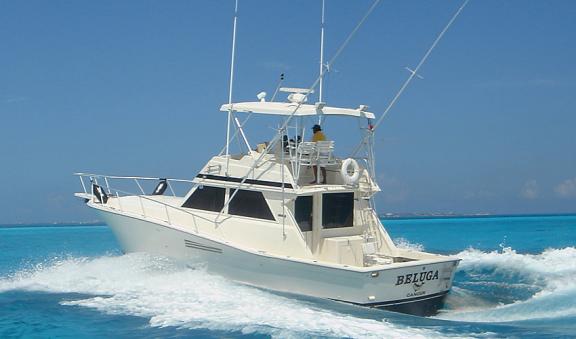 Enjoy a fishing tour in Cancun and have a great time in the beautiful blue waters of the Caribbean Sea.


Book one of our shared tours or rent a private boat. We have 11 boats from 31 to 41 feet in length, all of them with GPS, fish finder, and fishing seats with seat belts.

All our fishing tours include Capitan, sailor, ice, bottled water, sodas, beer, bait, TV, DVD, CD (these three last amenities depending on the boat), fishing guarantee and lots of fun. Our fishing tours offer two types of sport fishing: Trolling (100-300 ft.) and Bottom fishing (200- 600 ft.). For trolling or bottom fishing we mainly use lures or ballyhoo.

How many people can go on the boat?
It depends on the boat. You will notice above the price of each boat the maximum number of passengers that can accommodate.

Do you have English speaking captains?
Our captains and crew speak at least fishing English.The language will not be a problem.

Do the boats have a bathroom on board?
Yes. All our boats do.

Do I need to bring food?
Food is not provided on any of the fishing trips.
We recommend that if you want food request a box lunch at the time you make your reservation. It will be ready at the Marina and you pay for it upon check in.

Do I need to bring more beer and liquor?
The price includes only 3 beers per person. It is not an Open Bar. Also liquor is not included but you are welcomed to bring it. The price also includes 2 bottles of water and 2 sodas per person.
If you want more beer we recommend you bring it with you or request it, you can get as many as you want for an extra fee.
The transportation from the Marina will not stop for beer and/or sandwiches so we recommend you to have it upon pick up.

Will I get seasick?
Seasickness depends on the individual and the conditions of the sea the day you go fishing. We recommend that if you do not know if you get seasick, take a commercial motion sickness medication or use the wrist bands or patches that help you prevent seasickness problems.

Does the boat include Safety equipment?
Each boat counts with a First Aid kit and life savers for each passenger on board. Also each boat includes Rescue equipment, example: Radio VHS, flare, and Ring lifesavers.

Very good tour. I caught a 130lb shark and met some amazing people! Score: Recommend: YES Breanna from South Dakota
Great captain and crew! Score: Recommend: YES Christopher Duncan from knoxville,tn
A truly amazing and unforgettable days fishing spent with the crew on the boat Happy Hour the crew worked tirelessly to put us on fish in difficult conditions which resulted in me landing a 70lb Bull Shark which was the biggest fish i ever caught. thankyou all at Chac-chi marina. kind regards Robert Machin (Mr Robert). Score: Recommend: YES Robert Machin from Staffordshire, England.
Great tour, captain and mates. I want to go again, next time without my wife who has a weak stomach. Score: Recommend: YES darrin from idaho
The crew was excellent! My son and I had a fantastic time and caught many fish. Score: Recommend: YES Tony Shaw from San Diego, CA
The crew was beyond helpful and knew the job very well. Ive never seen anyone catch fish so fast. We managed to have a shark come to the boat and take the biggest fish away as the crew man was pulling the fish line. So cool, a little sea sick but i will definately go again. This was the most fun Ive had fishing and I would encouage anyone that has never fished this is an experience to have. Score: Recommend: YES Wayne Paesch from Edmonton, Alberta, Canada
We had a fabulous time. As promised my husband and I both caught several fish. It was an experience we will never forget. Score: Recommend: YES Jayme Miller from Poulsbo
The weather was tough and even an experienced fisherman would have had issues. The captain and two crew put us on fish all day and worked hard to give everyone an enjoyable trip Score: Recommend: YES Robert M. Scarano Jr. from Brooklyn, New York
We went fishing with Chac Chi fishing and yacht club. Dealing with them started out very positive as we had to re-schedule our wed. trip last minute. We felt the crew Capt. Carlos, Cesar and Frankin were all top notch. Carlos taking us to the fish while his crew worked hard the whole time, either baiting, rebaiting or changing baits and depths til we were hauling in the fish. I would estimate between the five on board, we likely landed thirty fish in four hours. The highlight being an approx.60 lb Amber Jack. We caught a wide variety of fish, Barracuda, Trigger, Runners, Tuna, etc. I found the crew to be very friendly and very fluent in english with no communication barrier at all. All around a GREAT way to spend the day. Thank you Score: Recommend: YES Darren Smith from Saskatoon, Saskatchewan Canada
View more
Other tours you might be interested in: