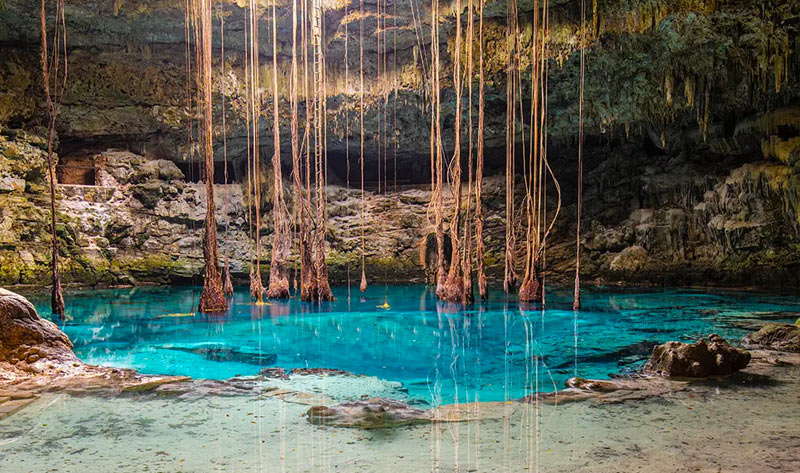 Hidden in the depths of the Yucatan Peninsula there is a world of darkness, home to mysterious gods and terrifying creatures. We are talking about Xibalbá, the Mayan underworld and the Ajawab, the Lords of Xibalbá. It is in this underground world that the spirits of every human goes to dwell after life on Earth.

The Mayans believed that one could access this world through the network of cenotes and the depths of the sea. This is the reason why they considered cenotes to be a sacred place. They also had the belief that the trunk of the ceiba trees were nature’s way of communicating between Xibalbá, the Earth, and the heavens above. The roots of this tree reached deep underground, its branches high above it, and the hollow trunk could carry the messages from world to world.

The Twelve Lords of Xibalbá

These beings of cadaver-like appearance are the complete opposite of life. They are in charge of the underworld, and tasked with maintaining the balance between the worlds of the living and the dead.

Xibalbá’s ultimate ruler is Ah Puch or Kitzin “the foul smelling”, god of death and king of the underworld. He reigns over Xibalbá with his wife the goddess Ixtab, deity of suicide. However, it was the Ajawab that kept the order in the depths. The council of the twelve Lords of Xibalbá was preceded by Hun-Camé and Vucum-Camé, the supreme judges of Xibalbá. It was them who dictated the other lords what their duties would be in the underworld.

It is narrated in the Popol Vuh that long before the world existed as it does today, the divine twins Hun Hunahpú and Vucub Hunahpú angered the Ajawab with their constant, noise games. Such was their wrath that the Lords of Xibalbá challenged the teams to a ball game, where the loser would forfeit his life.

They descended to the underworld through a long road with steep stairs, they crossed rivers of blood and water, and traversed through the houses of torment of the underworld:

One day Ixbalanqué decapitated his brother Hunahpú in front of the Ajawab council. He then put his head back on and used his magic to bring him back to life. The evil Lords of Xibalbá found this very amusing and they asked the twins to try the trick on them next. The twins obeyed and beheaded the twelve lords, but they did not return their heads, thus defeating evil and allowing the world as we know it today to flourish.

Neither one nor the other. To understand the myth of Xibalbá we must first understand its translation. What we know about the underworld and its horrors all comers from the sacred book of Popol Vuh of Chumayel. This is the only Mayan sacred text found so far, since the Catholic church ordered the destruction of all Mayan codexes and writings in the centuries that followed the conquest.

Although the Popol Vuh survived the conquest, the book was translated and interpreted through a Catholic lens. It was fray Francisco Ximénex that translated the Popol Vuh to Spanish between the years 1700 and 1703. During this time, the church still deemed everything related to Mayan mythology and religion to be blasphemous and evil. The original book has since been lost to history, and we have never found any similar document. So it is impossible to know for sure how accurate and objective the translation is; and sadly we will likely never know.

However, the book does make it clear that despite the evil nature of the Ajawab and the dangers of Xibalbá, this was no punishment. The Mayans also did not believe in a reward in the afterlife. Xibalbá is simply the next world in which human souls exist after life on Earth.

This is why the ancient Mayans were buried with water, food, and some tools and other objects. They believed that the deceased would need supplies for their long journey to this terrible place. It also this why in the days of Hanal Pixán we bring offerings for the dead, so they never lack anything in the afterlife.

Next year Grupo Xcaret will open a new park in Yucatán dedicated to Xibalbá that will be added to its very successful parks, it will surely be amazing and will allow its visitors to learn more about the amazing Mayan underground world.